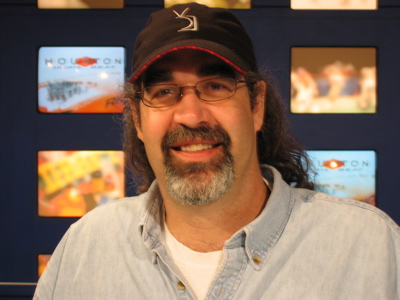 My Mind Plays a Clever Trick on Itself

With the beginning of the new year, there are a few things that I want to accomplish. I realized that it has been over six months since I had an entry in the blog; no particular reason other than not being diligent enough to spend a few minutes once a week putting my thoughts down. So look for a renewed spirit in sharing things "Outside of the Loop".
I find the brain an interesting organ and its capacity to entertain has always amused me. Editing by nature is at best repetitive and over the years I've had "work" dreams where I've been editing, only to wake up and realize I have to go to work and do the same thing I had been doing in my dream. Work dreams are the worst. You feel like you just put in eight hours only to have to do it all over again.
Last night I had a work dream. For some reason I was in California, I know this because the weather was spectacular and we had finished the day and were at an outdoor restaurant. I was with Jeff from Long Island, and as usual, he was hungry and we lost track of each other at the restaurant because it was three levels and of course for some reason had a train track running along side of it.
I was complaining to Jeff that I needed to go so that I could get some sleep before working the next day. This of course is where within my dream, I dream of editing and then get concerned that I'm going to oversleep. I end up waking myself from "both" dreams.
I was curious over the meaning of the train. I never saw the train in the dream but apparently it symbolizes a journey. A new year always means a new journey for me! 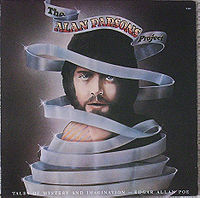 For your listening assignment, take in Alan Parsons Project "A Dream Within A Dream" inspired by the writings of Edgar Allen Poe.

You Can Never Go Dome

So a little over a month ago, there was a media tour of the Astrodome. I'm not sure what the purpose of the tour was, but Melissa Phillip from the Houston Chronicle took this photo and it was sent to me via a friend who knew I had worked there.
I sat in that chair for approximately four years. I saw the Sosa and McGuire home run race from that chair. I got to watch the '97 and '99 Astros teams, which may have been better than the 2005 team, from that chair.
It was crazy to me that it looked almost exactly the same as when I left at the end of the 1999 season. It also pointed out how far technology has marched onward. I'm amused at the 9" black and white camera monitors we used. Also, the size of switchers has increased proportionately.
We almost sat in each others' laps in the old days but one of the finest things about directing at the Dome, you always had a great seat. I will always remain fond of the building because it's part of my past.

Walking into Enron Field in 2000, there were painters still putting the final touches on the stadium just a few hours before the first game. In 2011, a new control room was built in the converted Star Suite #1. With an HD control room, some of the latest equipment, and a lot of space and leg room, it's become the new home. I just wonder, in 10 or 15 years, will there be as many changes in technology. Scary thoughts!
Posted by Stig at 3:02 PM 1 comment:

It's early in the year so it must be time for the "gathering". Yes, this is a direct reference to the movie "Highlander" but it seems appropriate for this event. Every year at this time, editors from around the country, and a few from beyond our borders, convene at one location to talk and learn about their craft.
The Master Editor's Retreat takes place in Austin this year starting tomorrow.
I have attended three times before and it's certainly one of my favorite things to do. We spend the day considering advancements in technology, software, and compression techniques, and wind the evenings down considering artistic and esoteric considerations in storytelling.
I'm always recharged after the retreat about being an editor and spending time with my fellow artists shows me the possibilities that are out there.
The dual nature of my career, directing/technical directing and editing, is not so strange. I think of directing as live editing and still try to find the right shot, framing, duration, and flow along the way. Plus, there are nearly as many revisions in live television.
As most of my editing is done alone, and all of my live work is with a large group, it's a nice mixture between the roar of the crowd and the quiet solitude and reflective nature of post production.
So stay tuned and wait to hear more on what the future holds courtesy of the 2012 Master Editor's Retreat!
Posted by Stig at 8:38 AM No comments:

5 Percent Takes 20 Percent of the Time

Greetings friends,
It's been too long since I've posted anything here but with the new year starting, I have dedicated myself to writing on a more regular basis. The world continues to be comical to me most of the time so I hate not getting to share some observations and opinions from time to time. Especially since I can sleep this morning for some reason.
I'm getting ready to attend the Editors Retreat in Austin next month and it has me thinking about the craft of editing and what I do on a regular basis. For those of you who watch television or any kind of media for that matter, have you considered the very painful process of editing? Yes I said painful!
It seems, and it's been true for many years, that as an editor, I spend roughly 20 percent of the time on a project, on 5 percent of actual content. You would think with advances in computers and non-linear editing software, this would have improved over the last twenty years but for some reason, it's a part of the process.
We now do reviews via sites like yousendit where we have less interaction in person with clients. Although I like the fact that I can do the majority of my editing alone, there's a gap sometimes in the communication process that can often lead to multiple revisions.
So I guess we just plug along, try to stay creative, and hopefully bridge that gap in communication a little better when you can.
Posted by Stig at 5:43 AM No comments:

A Bon Voyage to the Intern

Ah interns, so full of life, happy to have something to do, so idealistic, and at times, some of the most talented people in the room.
Today marks the end of Mallory Roberts' internship with the Houston Astros. I've seen many interns over the course of 16 years with the Astros, some I remember, most who just moved on never to be heard of again.
When I walked into the control room on Monday, I was in a foul mood because of a parking situation. Without getting into the details, let's just say if you are trying to park in Lot C, you better have a current parking pass with the correct date on it. We pick up our parking passes usually at the end of the month for the following month. Since the Astros were on a long road trip, we got our passes on Monday which happened to be the beginning of the month.

This is what my envelope looked liked. Mallory had taken the time to personalize most of the crew's envelopes and was more than clever about it. Consider that Brian Hoisier's (pronounced Hoe-Sure) envelope had a picture of Brian the dog from Family Guy, a garden hoe, and a bottle of Sure antiperspirant.
So Mallory's efforts made me laugh, feel better about the parking jerks, and generally made the show that night better than it would have been had she not been around.
Isn't that one of the best thing an intern can do? Not to say that her work on graphics and other duties she  had while at the Astros weren't just as important!
So we bid farewell to you Mallory, wish you the best in Atlanta at Turner, and know you are embarking on a very successful and long career! Fair winds to you!! Back to High School

Last week I got the chance to speak to three classes of high school students about production and post-production and the television business in general. What struck me initially was how young these kids were. We never think we are young and goofy once we reach a certain age, but some of us never really grow up and that's probably especially true in the television industry.
The technology continues to race onward and what took an entire facility to produce in the mid '80's is now sitting in one computer, audio processing, editing, special effects. The tools available for these kids is amazing.
Back in the day when I was dreaming of being a Rodriguez, Tarantino, or Wells, it required a lot of other people to complete the dream. Well my dream is re-awakened and I plan to use both the tools I have AND the experience of the last 20 years... that's truly the only advantage I have over the youth of today!
Posted by Stig at 9:53 AM No comments:

The All Encompassing Aspect of Editing

There are times when editing overtakes my life. I will eat, sleep, and work with the singleminded purpose of making a deadline for a viewing and everything else fades away.
The last ten days have been like that. I've been working to finish a 14-minute show and have done little else other than work. It hurts my head.
I write this as the producer and staff are watching my cut so I have...you guessed it, fourteen minutes to kill. My friends have been hassling me about getting another Stain Boy club CD out, whether or not I'll be attending an editing conference in New Orleans in March, and other non-job related stuff.
If the next twelve minutes go well, I'll take the afternoon off and enjoy myself for just a bit.
I also want to cook more meals at home... three weeks ago I cooked Mexican salmon. Red pepper, jalepenos, onion... the colors of the Mexican flag. 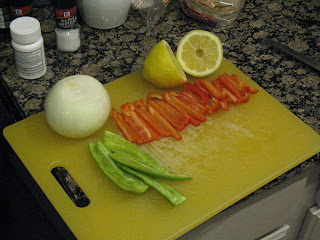 Here's to an evening at home away from After Effects, editing, or thinking in general!
Posted by Stig at 9:25 AM 2 comments: